One cannot hike Miquelon North without being reminded that it was a St. Francis Xavier Biology 30 class that put in the section of Waskahegan Trail from Miquelon Lake Park to just beyond Horseshoe Lake in the 1970s. 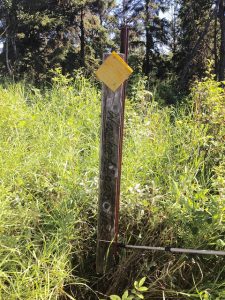 hard work the students, under the guidance of their teacher, Vi Sunohara, student Gary Hnatko, and our Pat Bourque, hauled a sharpened 4×4 post to the highest point on the trail. The students skillfully carved into the post “St FX Waskahegan Lookout.” They also had the foresight to bring the tools required to pound that post deep into the ground.

Some 40 years later, the landmark is still there and we talk about the great citizenship shown by the St. FX students and their teacher. (As evidenced by the Waskahegan Trail Guidebook: Our Millennium Edition (2001, p. 136), the students made quite an impression: “In line with the friendly bantering that went on between the class and Pat Bourque, the Waskahegan coordinator, Pat suggests that the sign on the hill should have read “St. FX Look Out!”

As we walked the trail, we imagined what a great education those students had so many years ago as they travelled the same route. Did they notice the standard summer flowers like the goldenrod, asters, sow thistle and yarrow? Or were they really keen to notice the less obtrusive Indian Pipe and Wintergreen? Were they scared silly by a pair of Ruffed Grouse like Anita and I were? Did they look up occasionally, like we did, and marvel at the zeppelin-like pelicans happily swirling with the wind currents above the lake? And was Erickson’s large culvert (a prominent landmark) still channeling massive amounts of water? Or did it look out of place then, as it does now, in the mostly dry, boggy pasture?

Back in the day, Miquelon Lake was much nicer for recreation, and the students likely took less time to eat their lunch and more time to frolic in the lake. We, however, were not tempted to go for a dip in the murky, shallow lake of today. As we enjoyed our lunch at a shady spot near the boat launch, we checked out the pictures that Vivian had already taken and gave our own student representative, Marco, the GPS so he could accurately determine our distance travelled. 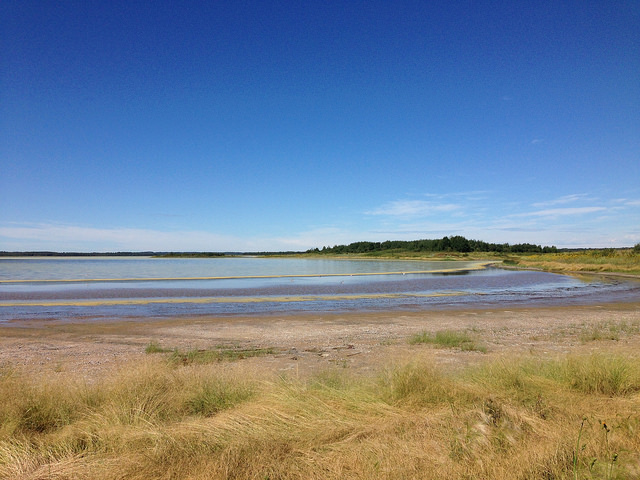 The route back was delightful The wide open meadows were teeming with wildflowers. During the hottest part of the day, we appreciated even more so the generous assortment of mushrooms growing in the cooler shaded areas of the bush.

As we walked along the varied terrain we could not help but appreciate the hard labour of our own trail maintenance crew that, like the kids of so many years ago, still battle large trees fallen across the path, dense slough grass, thistles, large boulders, thick shrubbery, cow patties, huge ant hills and plenty of mosquitoes. We were thankful to be able to hike on a very clear and extraordinarily well-marked trail. Total distance travelled, reported Marco, was 9.9kms. 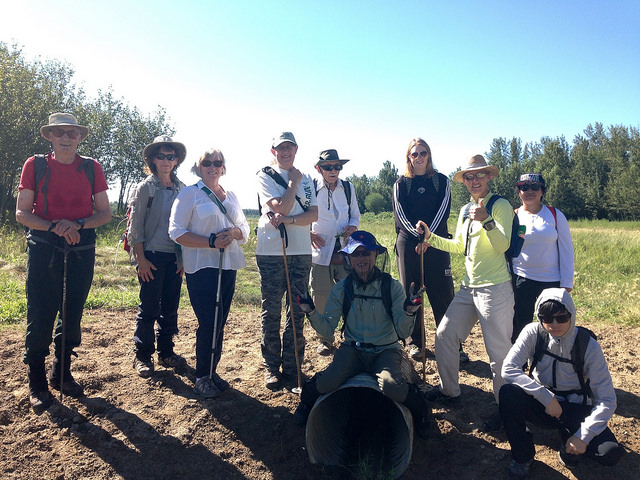