In September 2017 we said goodbye to one of our crowning achievements—the bridge over the Battle River, also known as Low’s Crossing. After many years of service, the bridge was about to fall into the river. With a lot of planning and labour from our Trail Maintenance team, plus generous support from the landowner and his equipment, the bridge was taken down and moved over two Mondays. We told you the story here.

But how—and why—did the bridge get built in the first place?

If you were at the AGM in 2017, you would have seen the excellent presentation on how the bridge was built. It was presented by Gene Miskiw, the man who was involved at every stage and took all the photos.

Now Gene has written the complete story of building the bridge, and you can read it here.

This is a story about

Could a bridge like this be built today? Read Gene’s story and decide for yourself.

Fred Dorward grew up in Viking Alberta, his wife Chris near Alcomdale, west of Morinville. Because of their professions of engineering and nursing, they were urbanites, however their heart was in the country. This they instilled in their children.

Fred’s hobbies included finding rocks and making jewelry, berry and mushroom picking, bird hunting and fishing.  All could be plied within an hour’s drive of Edmonton. Travels went in all directions, east toward Viking, west toward the Rockies, south to Drumheller and north to Thunder and Fawcett lakes.

A connector of all these pursuits were maps. Fred loved maps. He had virtually all the topographical maps that were available at the time surrounding Edmonton. Marked on those maps were favorite gravel pits, creeks with petrified wood, creeks and lakes, berry patches, duck hunting spots and favored boat launch locations.

And yes, the hikes.

As young as 6 I was out with dad constantly from May to October. By age 12 my brother Ross and I were pretty proficient in planning a trip and packing the right maps (and the station wagon) for the day or weekend. We understood how the topo lines on the maps worked and whether a hill was going to be too steep to climb before we got there. We understood where to turn off the highway and how to plan to get around a lake or over a bridge.

We hiked before hiking was cool. We did it with Converse running shoes and minimal equipment, at times down dusty roads. At first opportunity we got off the road and into nature that we loved.

I was born in Toronto, Ontario my older sister in Peterborough. Mom and Dad were westerners, but GE Canada’s lighting division had moved young engineer Dad and Mom to Ontario for 4 years of training after university.  There dad met folks who became involved in 1960 with a new trail in Ontario called the Bruce Trail.

Around 1965 Fred joined the Bruce Trail Association. He ordered all the maps and information. https://brucetrail.org/pages/about-us/history-of-the-trail

We were back in Edmonton when it all came together. Dad’s understanding of rural Alberta, his love of maps, his knowledge of nature, his acumen to structure an organization and seek support, his dislike of walking down gravel roads, and inspiration from the early days of the Bruce Trail gelled together when, in the fall of 1966, the federal government had a series of ads on TV encouraging Canadians to create something or do something to commemorate Canada’s 100th birthday in 1967. The trail was an idea! Where would it go? 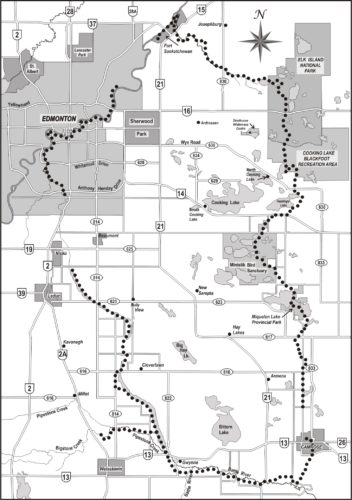 I recall vividly the topo maps in our living room in Avonmore that first winter. (I recall my mom asking when the maps would finally be cleaned up.) We discussed going to the west. The land was higher, less marsh, fewer lakes—but there was not a natural flow to the land in terms of a circle routing.

Fred was smart enough to know that help was required to do the massive amount of work to set up memorandums of agreement, contact land owners, deal with government, build a club following and get going. He approached a club that he was in, the Oil Capital Kiwanis Club to help. They agreed very quickly to support the project.

(Dad was a Kiwanis member since about 1960. In the early ‘60s one of the major fundraising efforts of the club was the selling of apples in the fall. Hundreds of members of the club, our family included, would dress up as clowns and stand at red lights in busy intersections and sell apples out of baskets to the stopped cars. We would be at the doors of malls and we would rove downtown and Whyte Avenue. It was a lot of fun.)

The discussion of Ross and I hiking the trail was brought up by Dad in the winter of ‘67/’68. I had just turned 16, Ross was 14. We had no doubt that we could do it, and we pretty much just started planning and getting on with it. For us it was just an extension of what we had been doing for years. Just for a longer time.

The hike was grueling. We were always short of good water, although homes and farms along the path were most generous. We drank from a well that we found later had been contaminated, we were chased by a bull that had very large horns, and we endured some serious bog and slough conditions at times. But we had for the most part good weather and we absolutely loved the trip. The Mayor of Camrose met us and we had a whole lot of folks from St. Albert greet us. We were allowed to camp overnight in Lions Park in St. Albert although that night sparks from the fire burned our sleeping bags (no burns to us). We were honored to have Lt. Governor Grant MacEwan meet us in Emily Murphy Park when we returned. When we got home we really enjoyed seeing an unlimited amount of water come out of the taps!

As a result of that hike, Ross and I were able to speak to many service clubs and scout groups over the next couple of years. We were more scared of doing that than hiking the trail! But that brought in interested individuals and volunteers and helped to expand the number who were learning about the trail.

Fred continued to meet with landowners and develop the team that would continue the work of the Waskahegan Hiking Trail Association until he retired to Whitehorse in 1980. There Fred continued his outdoor pursuits with tourist tours, prospecting for precious stones, working on local trails, saskatoon picking, and northern gardening as well as sponsoring the filming and recording of historic sites in the Yukon.

The Waskahegan torch was passed to Stan Skirrow and many others who continued the work to this day.

(Read more about the 50th Anniversary of the David and Ross’s hike.)

Shirley Jackson, a long time member, board member, hiker, and photographer, has just donated 151 photos of close-up nature photos for our archive. The Shirley Jackson Photography album is a unique collection of macro and zoomed-in photography, that includes over 100 photos of wildflowers and almost 50 photos of butterflies, other insects, birds, amphibians, and mammals. 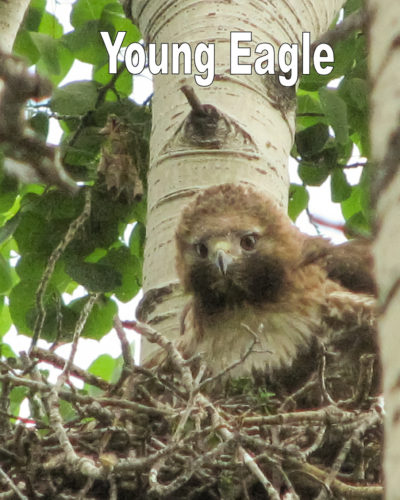 Until recently, Shirley was a frequent participant on our hikes and she always took photos. Her contribution to the Waskahegan photography collection is immense and goes back to 2007, when we first started archiving our photos online. Her annual DVD compilations, “A Year in Hiking”, were also popular and are fun to watch at any time of year.

Since retiring from the working world, Shirley is spending more time on world travel. Nevertheless, she took time to curate a collection of her nature close-ups taken on the Waskahegan Trail, and to organize, research and label the photos. She has passed these photos on to us, and we put them on Flickr.

Thank you, Shirley, for your gift of the photo collection and for your donation of field guides for future hiking.