The Waskahegan Trail is a unique resource that exists only because of the generosity of landowners. Before you set foot on the trail, know the landowner rights and the trail user responsibilities.

Cancelled due to high winds and heavy rain.
Super-glad to have the rain though. 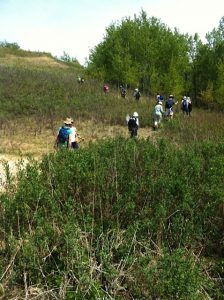 Although we had to trek up and down gully after gully, the views of the river valley were spectacular. When we rested for lunch on “Rest and be Thankful” hill, we were indeed thankful —and rested— as long as our leader (who forgot his lunch) allowed.

We imagined the Grand Trunk Railway trestle bridge that once spanned the entire valley, we admired the red tail hawks riding the wind currents and ignored the plentiful seagulls squawking overhead. 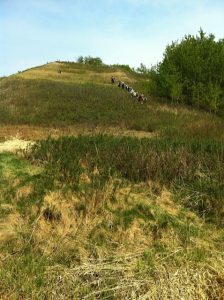 At lunch Elizabeth, aka Madame Butterfly, recognized the rasping, cricket-like sound of a Clay Warbler and the group pointed out several Cabbage Butterflies, a Mourning Cloak or two and a Swallow Tail Butterfly.

The musky-sweet scent of blooming Silver or Wolf Willow was distinct but not overpowering, as it can be. Other distinctive native Alberta flora caught our eye:  Three Flowered Avens or Old Man Whiskers, Heart Leaved Alexanders, False Toad Flax, lots of Saskatoon still in bloom as was the Chokecherry, Gooseberry and several types of currants. Also identified was Silverweed, Buffalo Bean or Golden Bean, Mouse-eared Chickweed and most spectacularly, Shooting Stars. 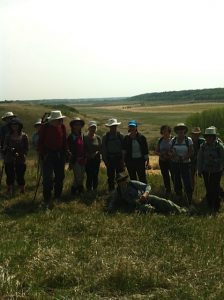 Further, we saw evidence of early spring blooms on the Crocuses and some Prickly Pear Cactus came along for a ride on some of the hiker’s socks. There was no sign of the Milkweed that was planted along the route by previous irreverent WTA hikers (who will not be named).

When we looked back over the valley as we finished our hike, five sleek bay horses suddenly appeared at the top of the ridge to show us that they knew we were in their pasture and to thank us for the rare entertainment that we brought to the East Battle River Valley.

On May 11, 10 of us really cleared did clear the trail well from A111 until about three quarters of the way where we came across a floating/sinking boardwalk with deep water caused again by beavers. So instead of a hike through, we returned and then went in from the other direction. Out again on May 18 we cleared trail from the gas well to A109, again running into a floating boardwalk, but this time we could route around it.

Landowner Ken Bilobrowka beside the first floating boardwalk gave us access through his property to build a new bridge. Ken also helped with the bridge by cutting a telephone pole for supporting the bridge over the water and helped put it in place along with his brother Kevin. Thank you!

Scroll back to top