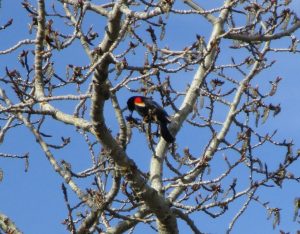 As the sixteen of us walked the 5 km stretch along Saunders Lake, we listened to the distinctive and familiar calls of red-winged blackbirds, Canada geese, ducks, and gulls. Those were the sounds we knew.  Or as Gail described it, the “vocal conversation.”

There were many more bird calls that were not so familiar.

The first unusual birds we saw were several pairs of black and white ducks. These turned out to be the tufted duck (Aythya fuligula), which are increasing in numbers. 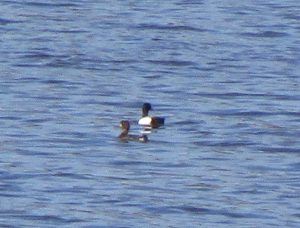 Next, we watched an American eagle soar and then land in its huge nest across the lake.

While we rested under the still-leafless trees, swallows swooped in overhead. Jerry pointed out the sound of sandhill cranes high above us, but most of us we were too comfortable eating our lunches, or engaged in conversation, to get up and have a look.

A red-tailed hawk screeched at us as we headed back.

The total hike was around 10 km. 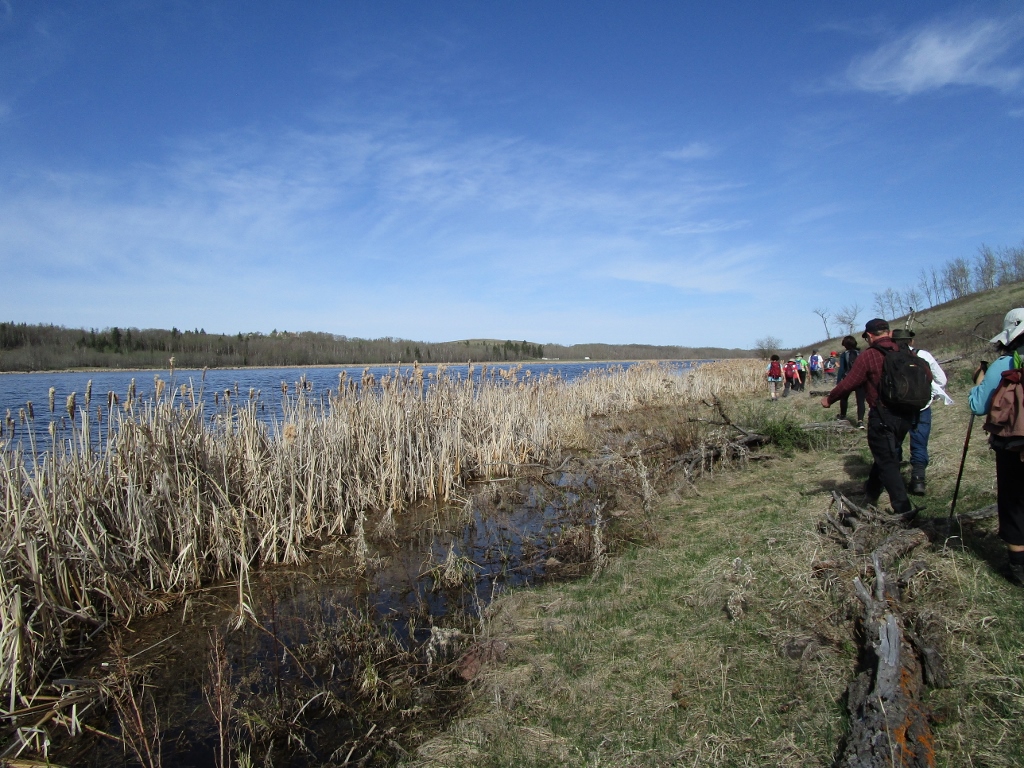 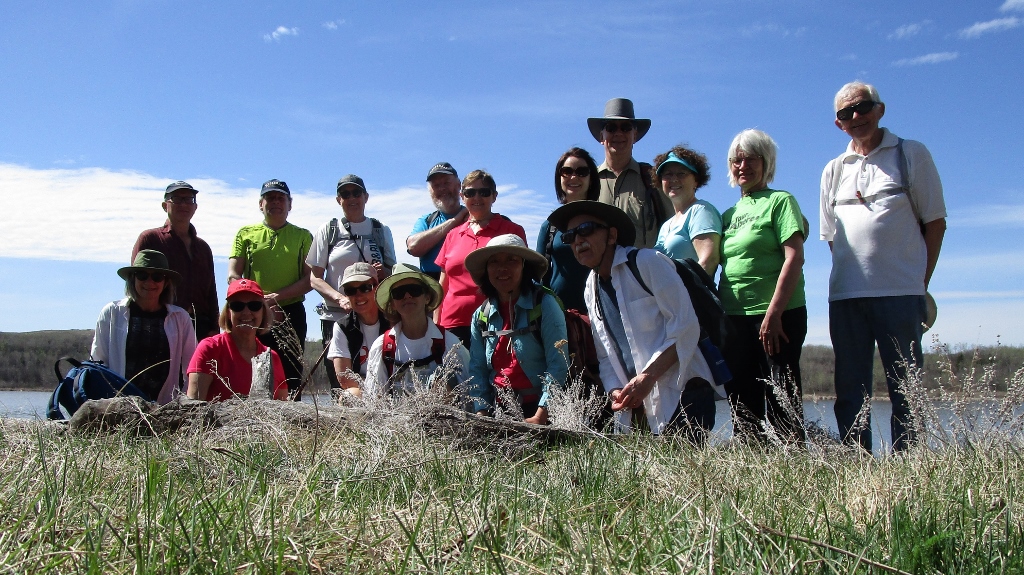 “I left with a greater appreciation of the ‘diamond’ that we have the privilege of enjoying, maintaining, and sharing.” 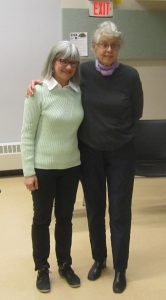 Those were some of the comments made after Friday night’s Annual General Meeting at the Central Lions Recreation Centre in Edmonton.

The evening began with the business meeting and election of the board. We had great joy in presenting a Lifetime Membership to Louise Davis, a key figure in leading the organization to maturity. You’ll find the tribute to Louise in the AGM 2017 Reports.

Following the meeting, we settled in to listen to the panel of long-standing members—David Dorward (whose father Fred was responsible for the vision of the Trail), Gene Miskiw, Peter Verhaar, Oscar Zawalsky, Rob Faulds, Louise Davis, and David Mutch. As Stan Skirrow was unable to attend, we were grateful that David had visited him that day and could bring his comments. 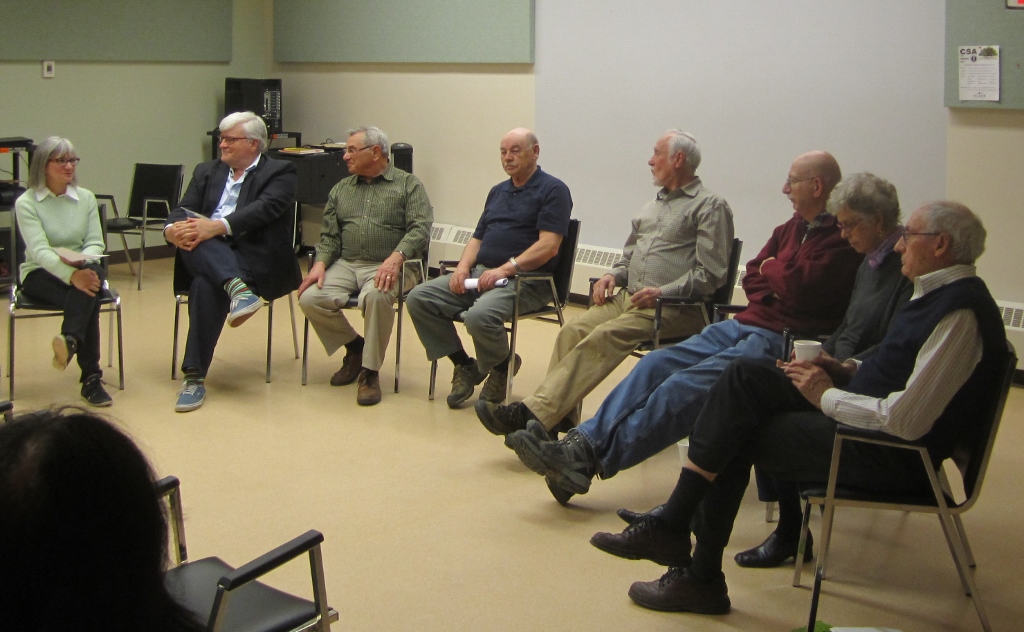 The panel entertained us by recounting many moments that were amusing, joyous, thought-provoking, or scary, such as:

We also got an appreciation of the great contributors to the Trail. Fred Dorward had the vision, and was able to get organizations and governments on board, including the avid support of the Lieutenant Governor Grant MacEwan. But it was Stan Skirrow who was instrumental in persuading landowners to go along.

The panel also shared their wisdom on volunteerism…and left us feeling inspired. 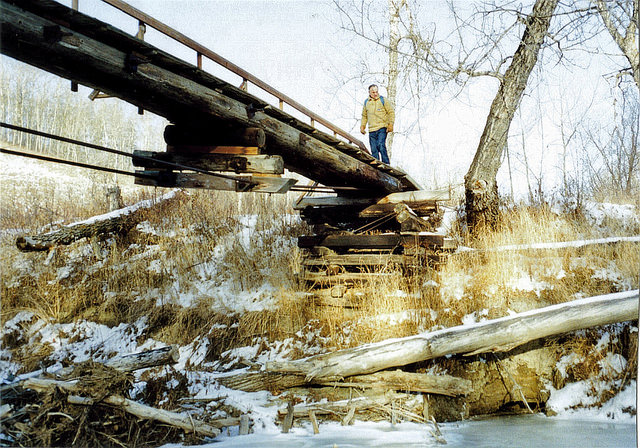 Following the panel, Gene Miskiw treated us to the fascinating story of the building of Low’s bridge on the Battle River. This amazing accomplishment, which involved only donated materials and volunteers, is captured in Gene’s photos which you can view in a collection of albums on Flickr.

How refreshing it was to get outside after the cruel cold snap of early March.

Ten of us started out from the little shopping centre in Westridge and headed straight into the ravine. After a short walk through neighborhoods, we descended into the river valley. We crossed the river on the Fort Edmonton footbridge, and saw just below us a patch of open water occupied by ducks. 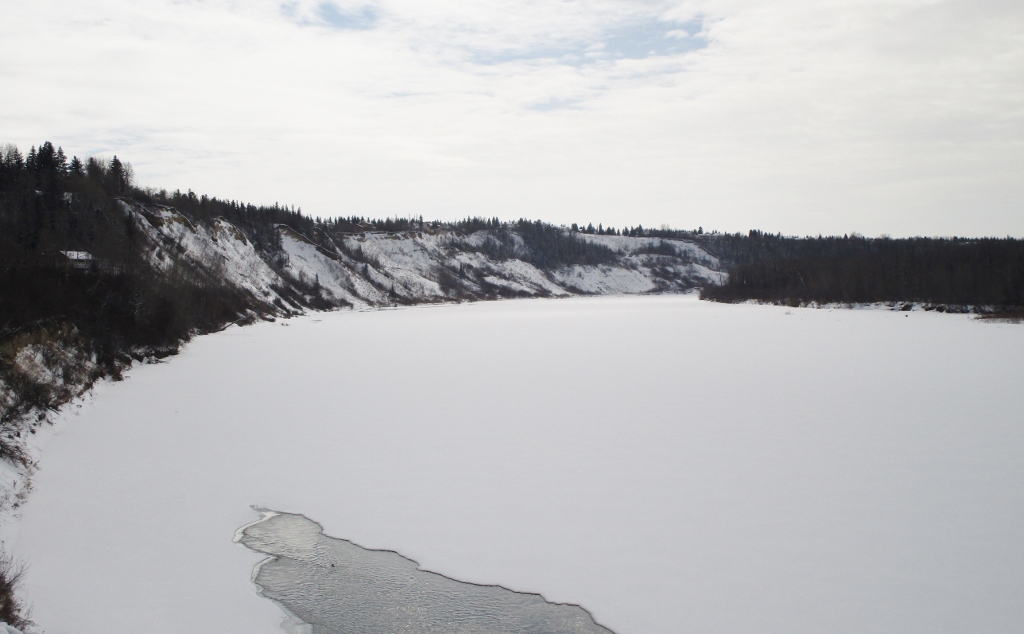 (By the way, have you noticed the geese are back?)

As we neared Fort Edmonton, David caught up to us and made it eleven. 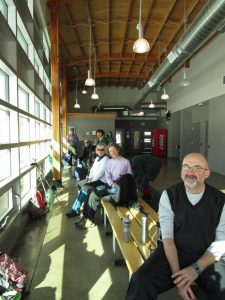 We had our lunch at Edmonton’s best-kept-secret rest stop—the Alfred Savage Centre. Always clean and bright and comfortable for hikers.

On our return, we left the river valley by taking those 10200-step stairs that we all love to grumble about. But I’ll bet the climb is no higher than Schnee Hill or Rest and Be Thankful (which is coming up on April 23!). 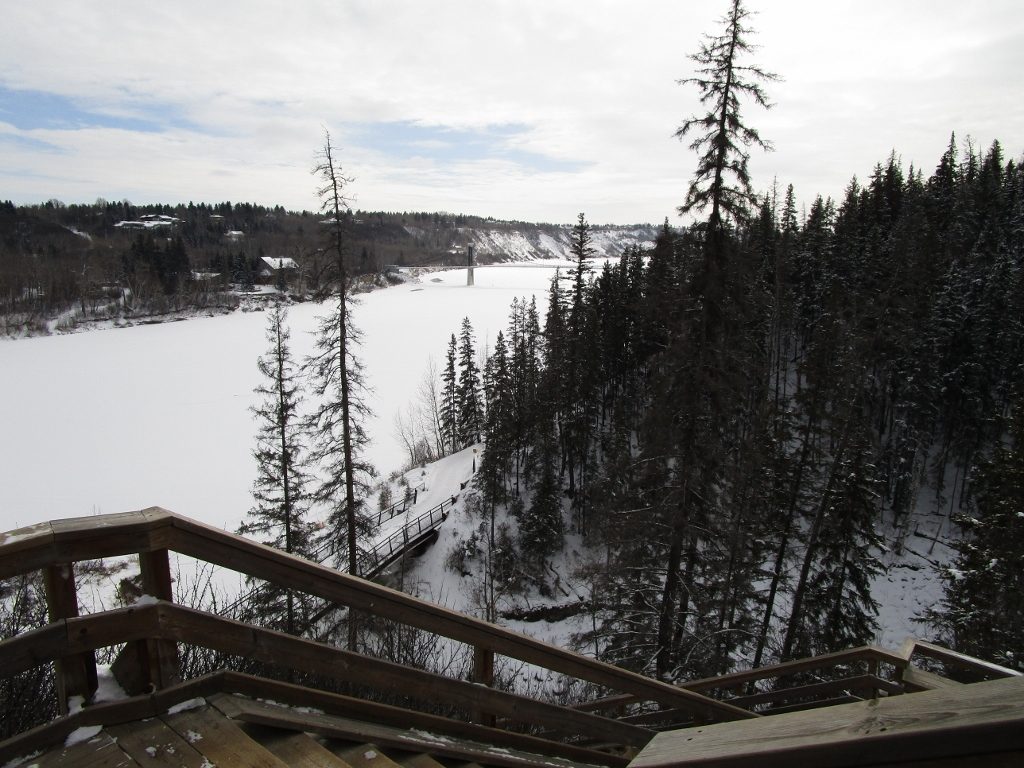