Eleven people came out to hike the trail in the Ministik Bird Sanctuary. Except for chickadees and some downy woodpeckers, the birds weren’t making themselves obvious. Instead, the natural treasures we observed were the moss-covered muskeg and peat bog, an enormous variety of well-developed fungi, and a patch of yellow rattle.

Three of the hikers took the “Smell the Roses” route to see the yellow rattle, a “pretty wildflower that attaches to grass roots and suppresses their growth enabling wildflowers to flourish in grass lawns and meadows” (wildflowerlawnsandmeadows.com). 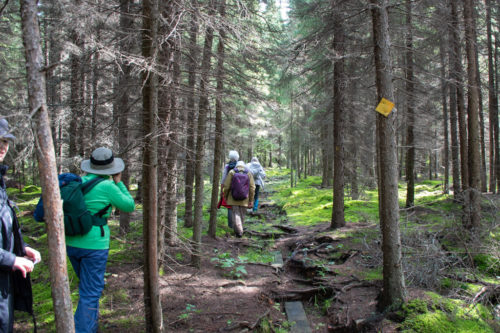 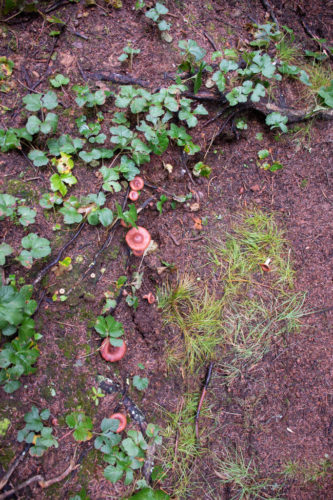 The other eight followed the trail that led to Horseshoe Lake. Early on, we reached the muskeg section—an old spruce forest with ground covered in a thick, delicate layer of moss punctuated with ferns and Labrador tea bushes. We stepped through carefully on the straight path and came out to a spongy patch of pure peat moss, where blueberries and other uncommon plants grow.

This whole area is obviously sensitive to footsteps. Our Trail Maintenance and Permissions coordinators are currently working to get permission to reroute the trail around the area. This will protect the beauty of the landscape and should enable us to use the trail in wet seasons.

Here are just some of the fungi we saw on this hike:

Thanks to Anita and Jerry for leading the hike and to trail maintenance for their efforts in staking out the proposed new reroute. You can see more photos on Flickr. 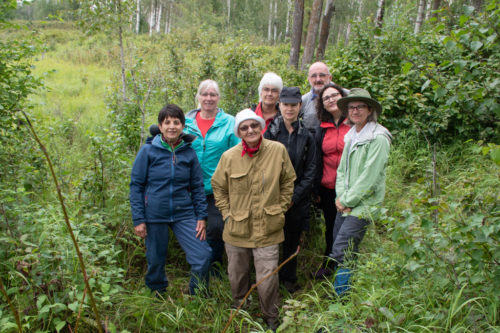